Peace Christian School has partnered with The University of Saskatchewan and FloraMaxx Technologies Ltd of Kelowna, BC to study the viability of growing haskap berries in the Peace Region of BC.  The project is designed to provide students with hands on opportunities to explore curriculum related experience and serve as a potential revenue source for PCS. 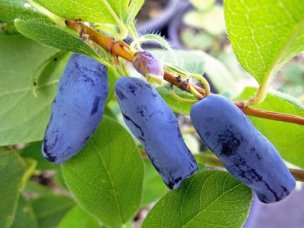 Haskap is the Japanese name for lonicera caerulea, also known as Edible Blue Honeysuckle, Honeyberry and deepblue honeysuckle, or sweetberry honeysuckle. Haskap is an ancient Japanese name of the Ainu people of Northern Japan for the fruit meaning “berry of long life and good vision”. The first introduction of the cultivated plant to Canada was at Beaver Lodge, AB in the 1950s. The fruit was bitter and not palatable. It has been found in the wild in every province in Canada except for British Columbia.

The name “Haskap” was chosen as the brand name that have been applied to new varieties bred by the Fruit Program at the University of Saskatchewan, Saskatoon, Saskatchewan, Canada.

Haskap berries come from varieties common to a circumpolar species native to northern boreal forests in Asia, Europe, and North America. It is mainly found in low lying wet areas or high in mountains, in a variety of soil and growing conditions. 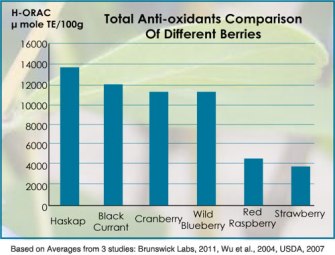 The health benefits of haskap berries have long been recognized in Japan where the indigenous Ainu people of Hokkaido refer to it as has ka ppu which meant “a bunch of little presents at the top of the branches”.  It is thought of as ‘the fruit of longevity’.  Modern scientific studies have supported this ancient claim with growing evidence that it is indeed an extremely nutrient and anti-oxidant / polyphenol rich berry…in other words…a SUPERBERRY.

Haskap berries have a higher antioxidant score and therefore a superior health benefits when compared to most berries.  Lab tests have shown that the high bioactive properties, which include the Anthocyanin “C3G”, show promise to prevent heart disease, cancers, cardiovascular diseases, diabetes, osteoporosis and neurodegenerative diseases.

Our role in this project is to test the commercial viability of newly developed varieties of haskap in the Peace Region.  Students will be involved in every phase of the project from planting to the recording of relevant data to harvesting. 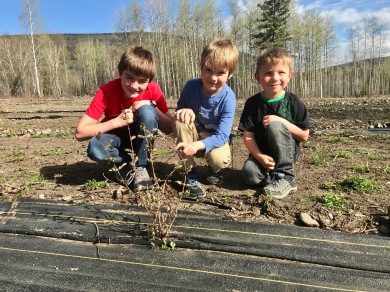 What we’re trying to do is allow students to explore information related to haskap and learn something from it. The project is about connecting students to the joy of learning while conducting research with multiple universities, all while covering local curricular expectations during their K-12 education.  The very real potential this crop presents to the Peace Region for innovative agricultural diversity, means the students of PCS will be ready to lead this industry into the future.

The potential of a revenue stream benefit to the school from a commercial orchard will provide stability for the school and foster diversity in the program for students.